This is the piece that all studies of modern music should start with! In Paris in 1913, Igor Stravinsky debuted his erratic, rhythmic, crunchy-sounding RITE OF SPRING (or Le Sacre du Printemps if you're French). This is as much a dramatic work as it is a musical work, especially since Stravinsky collaborated with another cool Russian dude, choreographer and dancer Vaslav Nijinsky. The story (which is a morbid tale of sacrifice), costumes, choreography, and music were so revolutionary for the audience of 1913 that listeners booed and shouted, with many leaving in the middle of the performance. People thought it was so bad, in fact, that many rioted outside the concert hall. After listening, could you imagine people nowadays getting this upset about a piece of music?

Here's another tidbit: The opening melody in the bassoon is so high in the range of the instrument that it--as legend has it--caused another famous composer, Nikolai Rimsky-Korsakov (the guy who composed FLIGHT OF THE BUMBLEBEE) to shout, "If that's a bassoon, then I'm a baboon!!" Whether or not this is true, that pun is off-the-charts.

Remember to post a comment! Some questions to ask yourself: What were you thinking about when you listened to this piece? What were some sounds/instruments you heard? Did you hear major or minor chords, or was there something else going on? What did you think of the dancing? Did the music and choreography work well together? 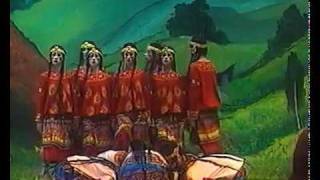